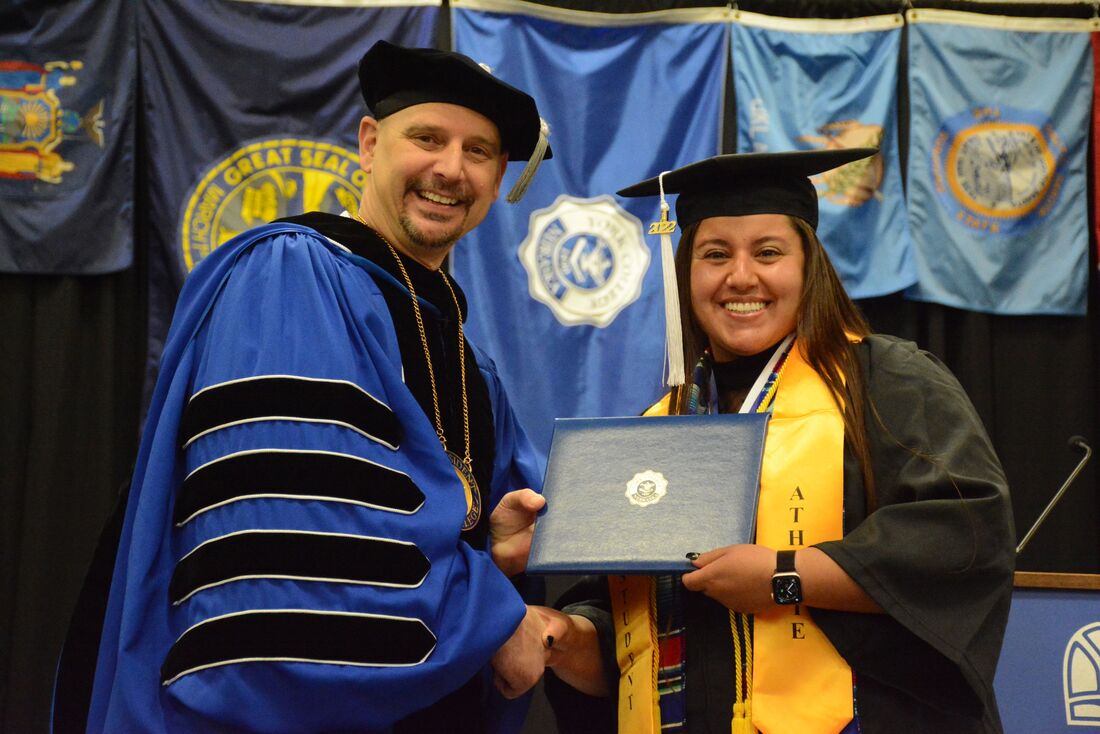 With its transition to university status this summer, York College held its final commencement ceremony Saturday morning. Hosted in the Campbell Activity Center, nearly 90 students crossed the stage to receive their degrees—the seats and bleachers filled with proud parents, excited family members, and friends. President Sam Smith welcomed everyone to the historic event and addressed graduates stating, “We’re celebrating the beginning of your new season in life. We celebrate that York College’s commitment to providing you with a Christ-centered education has indeed transformed you from a student to a teacher in your field of expertise. As president of York College it is my honor to welcome you to this amazing celebration.”

Cassandra Savage, president of The Savage Group, LLC and a member of the YC Board of Trustees, was the featured speaker at commencement. She and her husband, Ken, own nine McDonald’s restaurants in the Kansas City area where she has established a reputation for service to both her fellow operators and community. Savage received her Bachelor and Master’s degrees from the University of Illinois, Champaign-Urbana. She has held management positions in Education and with IBM, where she received numerous awards for outstanding performance and service. She and Ken are active members in the Overland Park Church of Christ and have 3 adult children and 4 grandchildren. 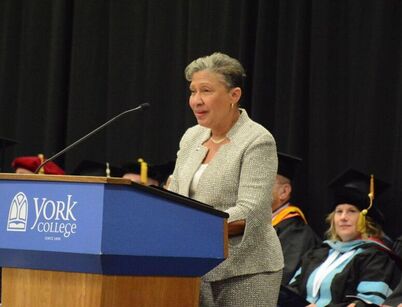 “This is a momentous day both for you and for York College. It represents both an ending and a beginning,” Savage said. “You’re the last graduating class of York College; the class of 2023 will be the first for York University. It will be a huge change for everyone at York and as a new beginning, a step forward in the life of everyone here. For you, the ending and beginning is more personal. Some of you will go on to graduate school, but for many of you, today is the last time you will put on a cap and gown and receive a diploma. This is the end, perhaps, of your formal education. Soak it in. Enjoy it. Be proud of yourself. You have achieved something that’s worth celebrating.”

“It’s a time to be proud but not satisfied,” Savage went on to say and then moved into her speech about The Race, the Pace, and the Gift of Grace.

The Gift of Grace:

Savage concluded saying, “I congratulate you on today, but I am so looking forward to seeing what you plan for and accomplish in the future. Thank you again for honoring me with a place in your commencement. Here’s to York College’s past and York University’s future.” 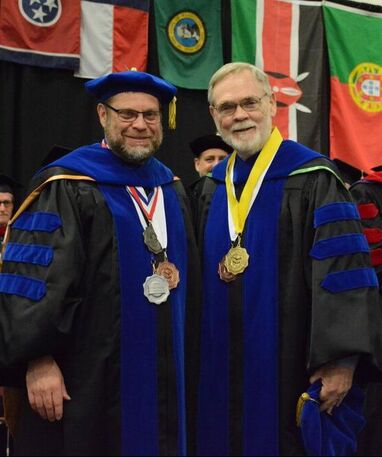 Dr. Frank Wheeler, retiring professor of Bible and chair of the department, was then recognized for his three-plus decades of service to York College and conferred upon with the status of Professor Emeritus. “Dr. Wheeler came to York College in 1988, spearheading efforts that resulted in the College offering its first 4-year degree program since the early 60s,” said Mountjoy. “For 34 years, he has made many contributions to this institution while diligently teaching students in the classroom. Over the years, Frank has quietly served as an example with his composed demeanor, gentle voice, and sounding board for many faculty members. He is a personal friend and example to many of us employed here. His meticulous preparation, consistency, and calming presence are undeniable and have been experienced by all who have worked with him. His experience, wisdom, and perspective will be missed by many.”

To his surprise, Dr. Mountjoy was then honored by President Sam Smith with his own Professor Emeritus status. Mountjoy, who also has served at York College for over 30 years, has accepted a position as associate provost for academic administration and dean of faculty at LeTourneau University in Longview, Texas.

“Dr. Shane Mountjoy began his long tenure at York College in 1990 teaching history. I personally had the honor of being his student in 1993, meeting every Monday night in Hulitt Hall for three hours with about 20 other students… In 2006 he ventured into administration, taking the role of dean of students. He was added to the YC Senior Leadership Team in 2009, then promoted in 2010 to vice president of student development. In 2014, Dr. Mountjoy was named to the position of provost and he has served as York College’s chief academic officer since then. Dr. Mountjoy has been ferociously dedicated to the progression of adding value for the education students receive at York College. In addition to collaborating with others to deliver new programs, Dr. Mountjoy has also led our campus toward meeting the standards of our accrediting body. While leading in various ways throughout his 30+ years of service, there have been also times where he has met countlessly with students that he mentored, that he fed, and he supported here at York College. Therefore it is my privilege to announce today that in recognition of the extensive contributions and sacrifices he has made over the last three decades inside and outside the classroom, York College is conferring the status of Professor Emeritus upon Dr. Shane Mountjoy.”

The ceremony continued as graduates lined up to walk across the stage to receive their diplomas from President Smith with a smile, a handshake, and frequently, a hug. Graduates were then hooded by their escort with the color of academic regalia that represented their field of study.

The York College Concert Choir, conducted by Dr. Clark Roush, closed out the ceremony by performing “Sweet Home” and “I Got a Home in-a-dat Rock” before leading the audience in the singing of the York College Alma Mater. 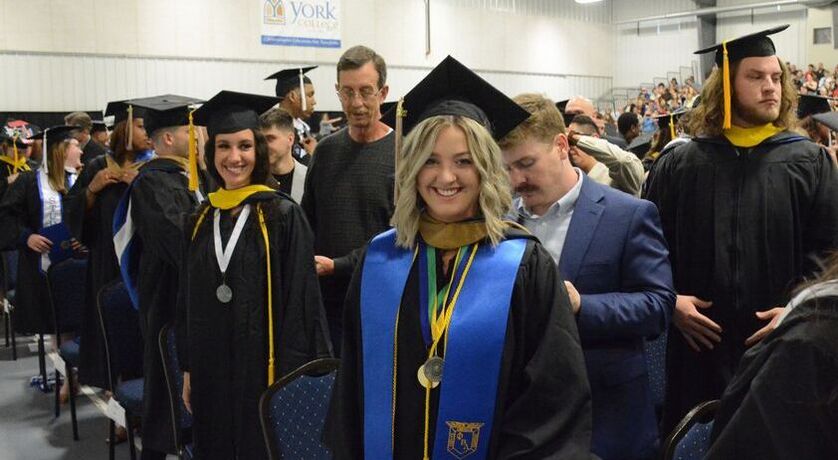