Dr. Tim McNeese, longtime professor of history at York University, has been selected as a recipient of the 2022 Nebraska Book Award in Nonfiction Biography Honor for his recently published book, Time in the Wilderness: The Formative Years of John “Blackjack” Pershing in the American West. The Nebraska Center for the Book announced the winners of its annual awards earlier this week.

​ “This award is very affirming,” says McNeese. “It says someone else thinks my writing is worthy of some sort of note.”

McNeese’s book is one of fourteen books receiving the Nebraska award this year. Categories include children’s and youth books, fiction, nonfiction, poetry, and book illustration. This year’s 2022 awards are being given to books published in 2021. The Nebraska Book Awards are presented annually to books written by Nebraska authors, set in Nebraska, related to Nebraska, or published by Nebraska-based publishers.

“I think I had that base covered with the Pershing biography,” says McNeese. “I’m a Nebraska author, the book was published by the University of Nebraska Press’s Potomac imprint, and was set partially in Nebraska, since Pershing taught at UNL for four years during the early 1890s. If there was going to be a Nebraska Book Award for anything I wrote, this was the book.” 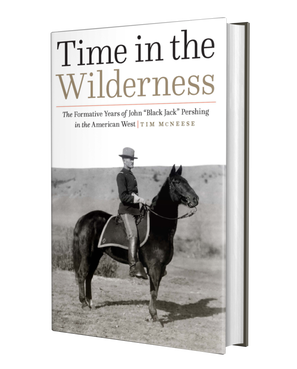 University of Nebraska Press editors informed McNeese in June they were submitting his book as an entry in the competition.

“I was delighted to hear that the editors thought my book was worthy of the competition,” McNeese notes.

Time in the Wilderness represents the first full-length biography of General Pershing published in more than forty years. McNeese limited the book’s coverage of Pershing’s life to those decades preceding his military service during World War I where he served as the commander of American Expeditionary Forces in Europe.

As McNeese explains: “The book was designed to provide insight into how Pershing’s service in the Army out west, which began with his graduation from West Point in 1886, helped prepare him for his ultimate assignment as leader of American forces in the Great War.” Pershing was stationed at various times as a cavalry officer in New Mexico, Montana, South Dakota, Oklahoma, California, and Nebraska, where he served as commandant of the cadet program. During his time at UNL he taught student and future Nebraska author Willa Cather how to fence.

McNeese wrote the book during the spring of 2020 just at the height of the Covid pandemic. When it came time to find a publisher, his wife, Beverly, suggested the University of Nebraska Press.

“Things just fell into place for this book,” says McNeese. “I’m glad we went with the UNL Press.”

Since writing Time in the Wilderness, McNeese has written another biography with Nebraska connections. Titled William Henry Jackson’s Lens: How Yellowstone’s Famous Photographer Captured the American West, the book, still in process of publication, focuses on the nineteenth-century photographer W. J. Jackson who took the first photographs of many places in the West, including Yellowstone, the Tetons, Mesa Verde, the Garden of the Gods, and the Mount of the Holy Cross in Colorado. That book is slated for publication in 2023.

“Like Pershing, Jackson lived in Nebraska for several years,” explains McNeese. “He established an early photography studio in Omaha during the late 1860s where he documented some of the local Native Americans and the advancement of the Union Pacific Railroad line across the state and further west.”
​
McNeese has published many other books during his thirty years as a history professor at York University. He says receiving the Nebraska Book Award will stand out as a highlight marking his writing career.