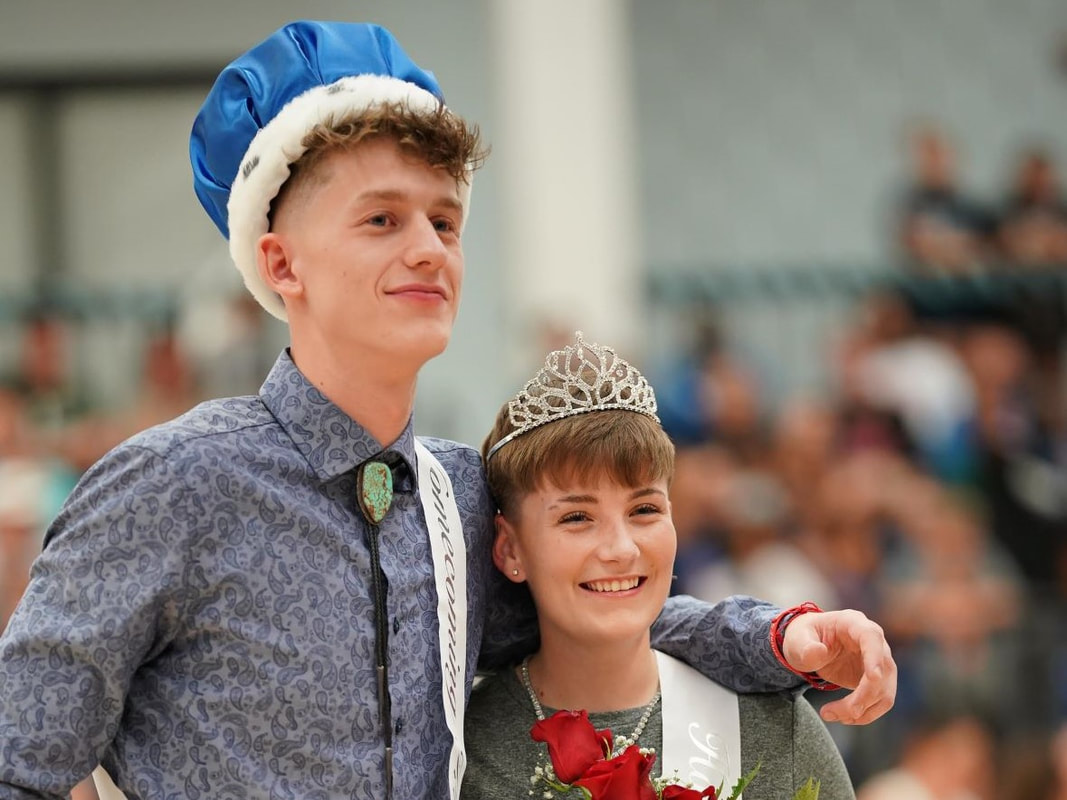 It was by far the busiest homecoming that York University has ever hosted as several hundred guests were welcomed to campus for a beautiful weekend, October 21-23. Alumni returned to relive their great college memories and to see the changes that have blessed their alma mater over the last few months. The weekend schedule included the usual: a theatre department production, golf scramble, alumni reception, chapel, choir concert, Athletic Hall of Fame induction, soccer and volleyball games, and class reunions. But the once-in-a-lifetime events put it over the top as far as homecomings go.

Friday’s Homecoming Golf Scramble was won by Aaron Conyers ’15, Zane Pfau ‘19, Aaron Alvarez ’20, and Jessica Simants 22’ and raised $300 for the golf program. It was followed that evening by the President’s Reception for all alumni. The weekend also featured the York University Athletic Hall of Fame induction of Nick Harlan ’01, Lynnette Pickering ’01, and Carolyn (Barr ’02) Johnston.

Homecoming Chapel was a packed house as Grant Rathe ’03 led the singing, Eric Jacobson ’90 had the opening prayer, and Dr. Jordan Sikes ‘03 gave the morning’s address. Chapel was followed by a moving performance by the York University Singers which included an instant classic “Marching to Zion,” arranged by YU’s own Lester Ray Miller III ‘00 and a commissioned piece by the Sikes family “You Will Come to Life” composed by Dr. David von Kampen. A host of alumni joined students on the risers for the traditional closing songs.

Following the concert, Annie (Keesee ’01) Johnson of Wichita, Kan., was recognized with the Young Alumna of the Year award and Dr. Steve (’71) and LaRee (Scroggin ’71) Eckman were honored as Alumni of the Year. Before they could take a seat, President Smith whispered for them to remain on the stage for a special surprise presentation and then announced that York University's newest residence hall will now carry the name of Eckman Hall, honoring the service and dedication of Steve and LaRee to York University. Steve, who served as president from 2009 to 2020, now serves as chancellor.

During sets of an electrifying women’s volleyball match in which they defeated Sterling College 3-0, the York University Homecoming Court was introduced. Pictured above are this year's king and queen: Luka Gelb and Jess McGrath. Luka is from Tucson, Ariz., and pursuing his bachelor's in business management and his master's in organizational and global leadership. He is the senior class representative in student government and is a student assistant coach for the men’s basketball team. Jess is a biology–exercise science major from Widnes, England. She is a midfielder on the women’s soccer team and a guard on the basketball team.

Senior candidates for queen were Emily Eggar of Wolf Point, Mont., Grace Gaer of Irwin, Iowa, and Jasmine Scarbrough of Arlington, Texas. King candidates were Sal Fernandez of El Paso, Texas, Jordan Strong of Bellevue, Neb., and Alex Villa of Ridgecrest, Calif. Attendants honored from the freshmen class: Lauren Perez of El Paso, Texas, and Andy Jewell of Fort Worth, Texas, sophomores: Macey Truitt of Derby, Kan., and Bryson Adams of Clarksville, Tenn., and juniors: Abbe James of Edmond, Okla., and Austin Grant of Gardnerville, Nev.
​
Besides class reunions and dinners going late into the night, weekend guests were treated to a Friends Reunion Concert in McGehee on Saturday. As part of the 1982 class reunion, Brett Osborne and Brett Carter got the band together and gave a very memorable concert that included their early 80s repertoire and plenty of nostalgia.
Mark your calendars for Songfest, April 6-8, 2023.
Photo Galleries Videos
©