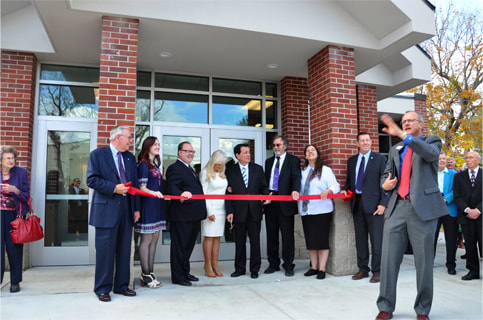 For three decades, Brent Magner (’79) has served in Christian education fundraising and development roles, advancing institutions of higher learning. His extensive knowledge and experience in the art of ‘the ask’ and inviting others to join in the mission of York College has blessed his alma mater more than can be repaid or a retirement party could ever remunerate.

Magner is turning in his overtime office hours, weekly meetings, board reports, and countless phone calls for a “gone-fish’n’” shingle. Not really—he doesn’t like to fish—but give him a good book to read and he will be content until supper. And if you have ever had a taste of Brent’s humor, whether it’s back in his days in YC's Soul Concern or how he laughs the hardest at his own jokes, you probably are guessing that he thinks that’s funny. He does.

Magner plans to stay on with the College in a lesser capacity, focusing on alumni and friends of the school. “I will continue to pester classmates and other alumni for gifts, but since I will work part-time, they won't have to listen to me as often,” he chuckled. “My friends will probably celebrate the change.”

Before returning to York College, Magner spent 14 years at Abilene Christian University, Abilene, Texas, where he served half of his time there as ACU’s Director of Development. In 2007, he made the move to Nebraska where he was named YC's vice president for advancement, a position he has held the last 14 years. His experience working with comprehensive campaigns at ACU as well as ACU’s Annual Fund became a tremendous asset, and his educational background and experience made him a great fit for the role.

“From the time Wayne Baker called me in 2007 until now, the journey has been all about God's work,” Magner said. “Sometimes His abundance caught me off guard. I don't know why. His faithfulness is the story of York College, or anyway the only one that matters. And because He's faithful, lots of lives have been touched and changed here. It has been a good journey, but it is time for me to step down. It's also a good time for a new person with energy and fresh ideas to help figure out what comes next.”

During his tenure at York College, endowment grew from $6.6 million to $17.5 million, and financial stability has been a constant, even in a nation embroiled with fiscal uncertainty. The Beyond 125 campaign that was completed in 2017 was the most successful fundraising campaign in the history of the College, surpassing the $10.7 million goal by $6.17 million. The campaign included the construction of the Bartholomew Performing Arts Center, Touchton Baseball Clubhouse, and the creation of the Clayton Museum of Ancient History. Dollars raised for student scholarships and endowment exceeded $9.5 million during the campaign.

“We have been very fortunate to have someone of Brent’s caliber to represent and promote York College in the areas of advancement,” said Dr. R. Wayne White, Chair, YC Board of Trustees. “His work with donors, alumni and other friends has put the College on solid footing that will pay dividends for years to come.”

President Sam Smith had high praise for Magner as well, “Brent has literally spent years’ worth of time on the phone, typed miles of words via emails, and racked up thousands of travel miles out of a deep passion for York College. His work and efforts led the College through numerous successful capital campaigns where millions of dollars were raised.  Perhaps more importantly, hundreds of people were able to hear Brent's passion for YC and they ultimately became partners with YC.  His passion for YC is truly contagious."

Smith went on to say, "One of the things I love most about Brent is that his first instinct in any situation is to pray. There is no doubt in my mind that Brent bathed this decision in prayer and his confidence in what comes next is in God alone."

Magner is looking forward to a slower pace where he can enjoy spending more time with family. He and his wife Kay have four grown children and two wonderful daughters-in-law: Daniel (Jasmine), Jennie, Caleb (Amalia), and Ann.

“I do remember the summer day after we had been here about five years, when I came home from work and Kay had spent the day with friends and our kids and later working in our garden,” Magner reflected. “She was reading Psalms and came across the verse that says, "The boundary lines have fallen for me in pleasant places." That was and is York for us. York is not a destination and probably on no one's bucket list, but it is a community and a college that we love. More importantly, York is an off-the-beaten-path place where God does a faithful work - sometimes in hearts that submit and sometimes in hearts that rebel. But it is all His good work no matter how we respond.”