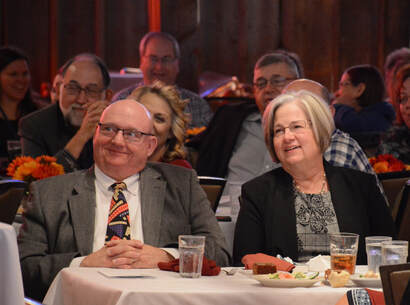 Gail Miller approaches the podium during announcements at chapel. Her silver hair is in a short bob, her face is creased with deep smile lines, and she’s wearing purple. “It’s Tuesday, and Tuesday is…” she says, then points to the audience.

“In news from the universe,” she begins, moving through the latest headlines from space then zooming in…to world politics, to national news, to Nebraska news, and finally, to the York community--where ‘news’ might include an anecdote from the police blotter. “Someone called to report a paper bag blowing down their street on Monday,” she states in a matter-of-fact tone. “So, watch out for that.”

The news from York on this Tuesday, September 20, was more somber, as the York University community mourned the death of Gail Miller, a beloved fixture on campus for nearly 40 years. The loss is deeply felt, as Miller was much more than an associate professor of biology--she was a mentor and friend, a colleague and confidante, and a steadfast example of Christian love and service. 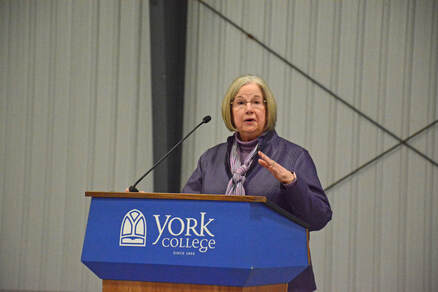 ‘A Light in the Room’

Gail and her husband, Dr. Ray Miller, came to York in 1982. Ray joined the faculty full-time as a professor of chemistry and Gail taught adjunct for several years while finishing a master’s degree from Ball State University. She held a variety of staff positions on campus beginning in 1983, started teaching full-time in 1990 and retired in 2020, a few years after Ray had hung up his lab apron and goggles.

From genetics to zoology, Miller taught with infectious joy. She loved her subject, whether she was teaching general science to freshmen or advanced topics to upperclassmen with pre-med ambitions. She had a gift for helping her students love it, too.

Miller was kind, generous, and always there for her students--but she was no pushover. “She would give you the world, but she wouldn’t give you an inch,” said Kim (Dreher) Hoyt ’02, a physician’s assistant in Grand Junction, Colo. As a teacher, Miller wanted her students to succeed, and the only path to success included a lot of hard work. “She was not there to sugarcoat anything. She was firm but loving. She was there to help you grow.”

Dr. Ray was Hoyt’s academic and professional mentor, but Gail was who she aspired to be like. “She modeled what it was like to be a professional woman of science, a great mom, engaged at church, and gracious to all,” said Hoyt.

Brian Gilchriest ’01 said without Miller, he never would have become a science teacher. “Gail gave me the confidence to believe that I could teach science. I didn’t think I was smart enough. She helped change my perspective and guide me through it. She was a huge inspiration and I loved her classes. She never took it easy on me. She expected me to do the work and learn the material, but she was always there to put her hand on my back and guide me through it.”

The Millers were recognized with numerous awards throughout their careers. Ray was presented with the Dale R. Larsen Teacher of Achievement Award in 2001 and Gail received the same award in 2008. The award is given annually to a full-time faculty member who has made outstanding contributions to York University. The Millers were also recognized in 2018 with York University’s first Distinguished Award in Academics and the L. Ray and Gail Miller Endowment for the Sciences was established in their honor at that time. As a fitting culmination, Gail was honored with faculty emerita status in 2021.

In 2014, Gail was recognized for her service to the Nebraska Veterinary Medicine Board with an honorary decree from Governor Heineman naming her an Admiral in the Great Navy of the State of Nebraska.

She didn’t let it go to her head.

No matter how many accolades and honorary titles she received, Miller was always an easy person to know. She was centered and authentic, sure of who she was, and gave others the confidence to be their authentic self around her.

“Mrs. Miller was a light in the room,” recalled Sara (Lincoln) Pella ’13, a teacher in Exeter, Nebraska. “She always greeted you with a smile and her laugh was contagious. She truly loved what she did and cared about those in her classroom and wanted them to succeed. She wanted to inspire them to do great things.”

Miller was the queen of applied science. From frequent field trips across Nebraska to in-class experiments and labs, her classes were less about lecture and more about experiential learning. “She opened my eyes to how you can take any part of a curriculum and make it fun and hands-on,” said Pella, who credits Miller with making her a better educator.

Caroline Seilstad ’16 agreed. “She brought the joy to science education,” she said. “She was knowledgeable and hilarious. She was great at getting everyone engaged and valuing each individual’s input. She always kept students on their toes.” She was not a stick-to-the-book kind of teacher. “She’d say, ‘here’s the textbook, here are all the facts, but it’s not going to be helpful in the real world unless you can apply it.” She gave her students freedom to explore in projects, allowing them to follow their interests and make the material their own.

Today, Seilstad is a graduate research assistant working on cancer research with the University of Nebraska Medical Center. Miller was a big part of her decision to pursue a career in science. “Gail showed me that you could be an amazing person, a person who could help others and have a positive impact, and also be involved in science,” she said.

When Caroline was exploring her options after college, Miller told her, “The world needs people who believe in Christ, who understand the power of God, who care about others, in the field of science.” She firmly believed that the world needed more Christian scientists. Seilstad is just one of many students who responded to her call.

It was the little things that made Miller so special, like the way her face would light up when someone stopped by her office, even if she was busy. Though she must have had her hands full with work and family obligations, she often found time to serve as a social club sponsor. She and Ray were big fans of Panther athletics and she would always remember to ask student-athletes how their game was if she missed seeing it in person. She had an understated, wry sense of humor, and could find the laugh in most any situation. 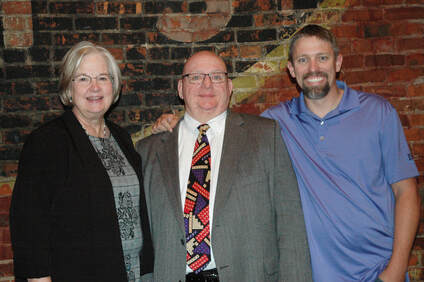 And then there were the candy jars outside her office. Who knew Atomic Fireballs and DumDum suckers would become such an important ministry tool? She probably didn’t set out to make that part of her spiritual outreach, but that small, inviting gesture made people feel welcomed and loved.

Visiting her office as a student was “complete joy,” said Dr. Aaron Fletcher ’02. For many years, Gail and Ray’s offices in Sack Hall were separated by a small anteroom that featured a table, chairs, and a couch--plus plenty of sugary snacks. “You would go there for candy, laughs and fellowship. Everyone was always hanging out there…For a while, it seemed like the science department had its own student life center. Her office was a hub. People wanted to be near her,” he said. “She poured into you.”

Fletcher loved when melt-away soft mints would appear in the candy jars. It was a favorite of his, and of Miller’s. “She always got those for me. That’s what she would say,” he recalled.

Beyond candy, Fletcher shared much with the Millers. The couple became important professional mentors as he pursued graduate degrees in science and started his own company, Bios Partners, a life sciences venture firm.

The Millers helped him craft a personal life motto: “To glorify God through excellence in the sciences.” It was a motto that they exemplified, said Fletcher, who admired Gail and Ray’s relationship and the model they provided of a Christian marriage as well as professional partnership. “They were such an example to me of what a godly husband and wife could look like. They dedicated their lives to a specific mission.”

The Millers gave their students confidence to be rigorous scientists as well as committed Christians. Miller didn’t need to argue for the existence of God. She embodied it, said Fletcher. “Her style was a genuine love for God that came out in her kindness, her care. She showed her students that you can be very intelligent and scientific and still very much be a person who loves Jesus.”

“She was so good about bridging the gap between faith and science,” said Emily (Eckert) Tandy ’02. “So many people believe that they are separate and can’t coexist. Gail showed her students that logic and reason and science weren’t in opposition to faith. In fact, they aren’t opposites at all but bound together, amplifying each other. The more you learn and the more complicated you realize things are, the more beautifully created it all seems.”

Outside of her work and students, Miller’s great joy was her family. She was endlessly proud of her two children, Les ‘00 and Lynn ‘02, their spouses Pam (Rathe) ‘01 and Jay Powers ‘04, and especially her grandchildren Madelynn, Hayley, Chase, and Audrey. She was a patient and loving spouse to Ray for 49 years. Even after decades of working together, with side-by-side offices and labs separated by a hallway, they still enjoyed each other’s company. Gail’s presence will be missed by many, but none more so than by Ray, her constant companion and longtime colleague. 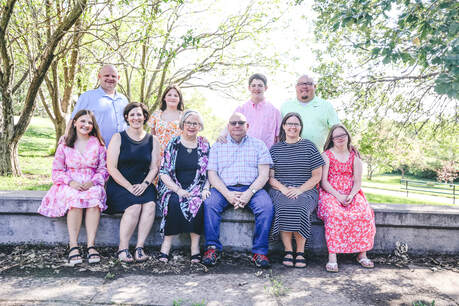 Though Miller will no longer be seen giving “In the News” announcements in chapel or rooting for the Panthers in the Freeman Center, her impact will live on. In the lives of students whose teachers once sat in her classroom; in the health outcomes of patients whose doctors learned the foundations of their craft in her lab; and in the life-changing research that will be conducted by faithful Christian scientists she trained, Miller’s legacy will be felt.
“In the history of York, there have been some giants. Mabrey Miller. Tom Schulz…And Ray and Gail Miller have got to be right there on that list,” said Brian Gilchriest, who is following in their footsteps as a new faculty member at York University. “I wouldn’t be where I am today without Mrs. Miller.”

Memorials can be sent to York University, for the L. Ray and Gail Miller Endowment for the Sciences.
Obituary
GIVE IN HONOR
©