A Life on Loan from God

A Life on Loan from God 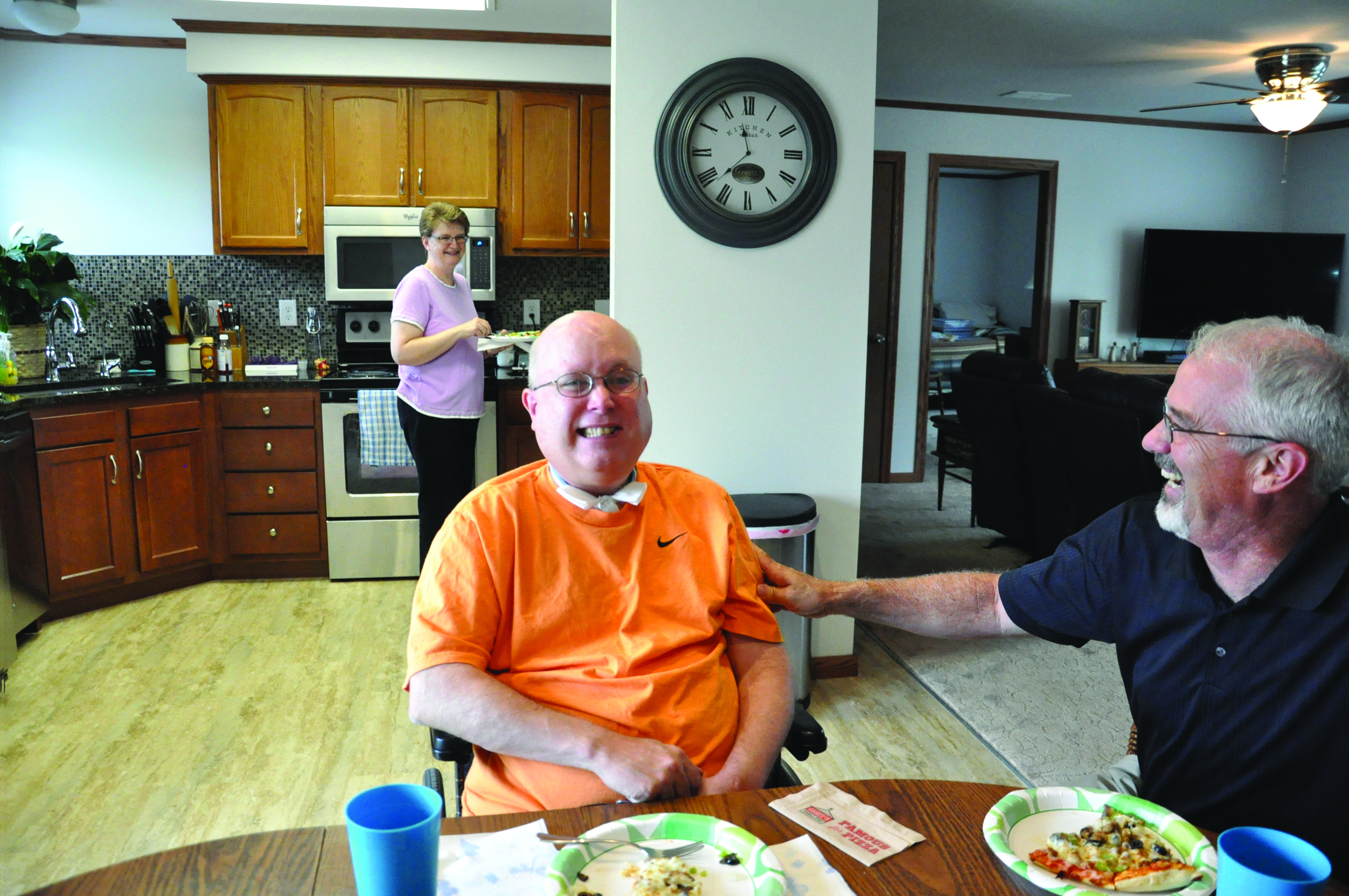 Michael J. Rush '84 passed away peacefully on Saturday, January 7, at the age of 59, more than twenty years after his debilitating aneurysm. He was surrounded by his family when he passed, and as word spread of his death, tributes to his life rose from the four corners of the world.

“Rusher,” as his classmates called him back in the 80s, a rambunctious teen from Colorado Springs, Colo., was a stranger to none. His college activities included being the Brown House RA, a sophomore officer in student association, president of Koinonia, a member of the band Reflections and then in the traveling group Friends, in which he toured Christian camps across the country. He loved people… and they knew that he loved them.

Katie (Klutts ’01) Hayden, who was part of York’s campus ministry leadership team said, “You know the quote from Maya Angelou: I've learned that people will forget what you said, people will forget what you did, but people will never forget how you made them feel. That FULLY describes Michael J. Rush! I cannot remember ALL the many things he said, lessons he taught, or skills I learned from him (I mean, there are a few…most of which make me smile and laugh). What I do remember is the way he could see someone, see their gifts, see the light they had — no matter how dim, and how he loved without question.” 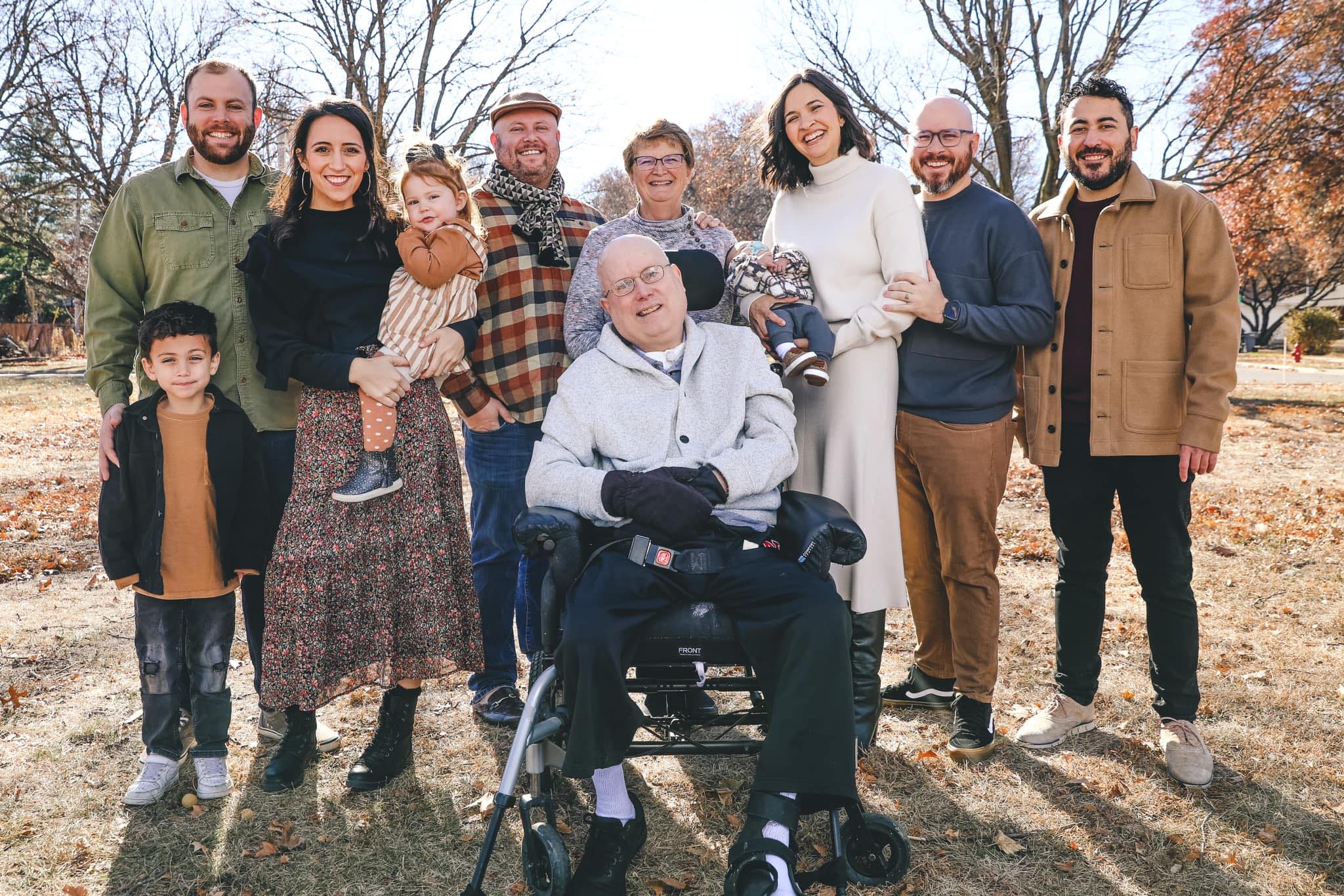 The Rush Family were altogether for Thanksgiving.

Mike married Janet (Reno ’83) June 9, 1984, and through their 38 years of marriage, transformed three active boys, Zach ’10, Caleb ’10, and Andrew ’14 into godly men. Their home was filled with love and laughter, maybe even shenanigans, and they made sure the welcome mat was always out for the many friends that came calling. They impressed on their sons that church life was a priority and were active members of the East Hill congregation in York.

In an encouraging social media post to one of Mike and Janet’s sons, Dr. Bill Pink ’87, president of Ferris State University in Big Rapids, Mich., wrote, “What an extraordinary man! A lover of God, and a friend to everyone. He will live on through the many he touched, and he now gets to put away the imperfect human body for a much better one!” 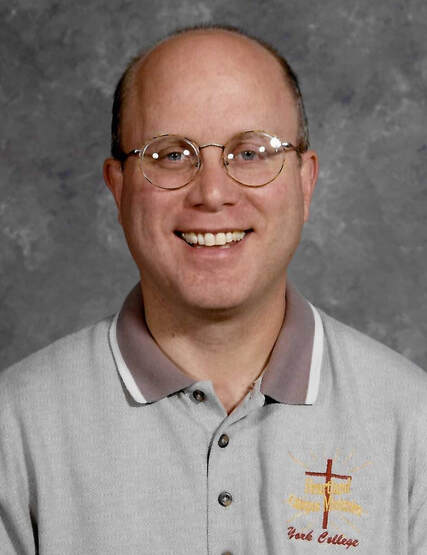 Rush began his service at York University in 1986 as an admissions counselor and served 2 years as the director of admissions. He moved his growing family to Sacramento, Calif., in 1990 to take on the duties of a youth minister for the Winding Way Church of Christ. After a few years on the west coast, he loaded up his family and returned to York in 1994 to again work in admissions and began his dream of developing a campus ministry program. Raising the majority of his own support through a network of friends and churches, Rush became York’s first campus minister in 1995 and grew the program into a vibrant ministry.

“I was blessed to be a campus minister under Mike while at York College,” said Traci (Doele ’01) Madole whose husband Matt is the youth minister at the Merrick Drive Church of Christ in Ardmore, Okla. “During that time he became a father-like example to me… The love he was able to show and give to others was absolutely phenomenal. He made anybody around him feel important.”

Like so many couples, Rush met with Matt and Traci for premarital counseling sessions and performed their wedding. The Madoles even named their middle son Drake Michael because of Rush’s impact on their lives. “I feel honored to be one of the many not just to be loved but to feel loved by Mike. My life is one where I usually blend in; he didn't allow that — he saw me.”

April 16, 2002, was a fateful day in the history of York University as Rush suffered a brain hemorrhage in his office. At the age of 38, the episode left him partially paralyzed and unable to return to his campus ministry duties. The gaping hole left by Rush was readily apparent during the following school year, and after only a few months of being without a campus minister, the administration received board approval to fully fund the position and conduct a national search for Rush’s replacement. To his delight, fellow classmate and friend Tim Lewis ’84 was hired to carry the torch, a role he served faithfully in for ten years. Today, thanks in large part to Rush’s kingdom vision, love for students, and commitment to the mission of the University, the campus ministry program continues as an integral aspect of the York Experience.

Joel Osborne ’00, who served as the assistant campus minister intern for two years under Rush and is currently completing his 20th year as a full-time missionary in Mito, Ibaraki, Japan, talked about the indelible mark Rush made on his life and the way he mentored and shaped him as a disciple of Jesus. He posted on Rush’s Facebook page, “I am so thankful that you helped me see how much Jesus loved others and how they were changed by that love. You loved us in the same way, and I hope I am doing the same. I look forward to seeing you whole and restored when Jesus gathers us all in eternity. Wait for me, I'll be there ready to introduce you to all of the people in Japan you've influenced indirectly.”

The service to celebrate Rush’s life will be Saturday, January 14, at East Hill Church of Christ in York, beginning at 10 am. All are welcome to come celebrate a life well lived. The service will also be live-streamed. In lieu of flowers, the family requests that you consider a donation to York University Campus Ministry. 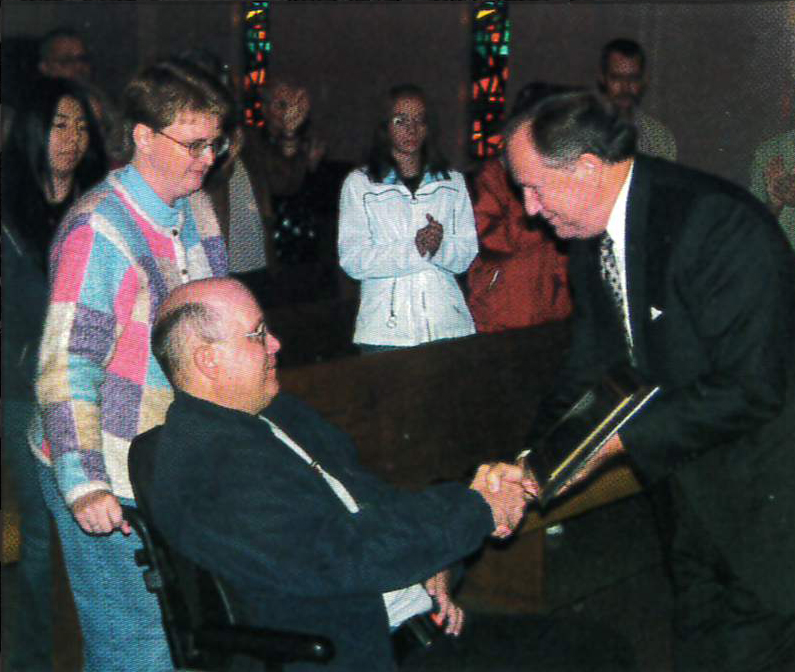 Mike and Janet were chosen Alumni of the Year in 2004. Mike worked in campus ministry and admissions for 14 years and Janet recently completed her 20th year in the bookstore. 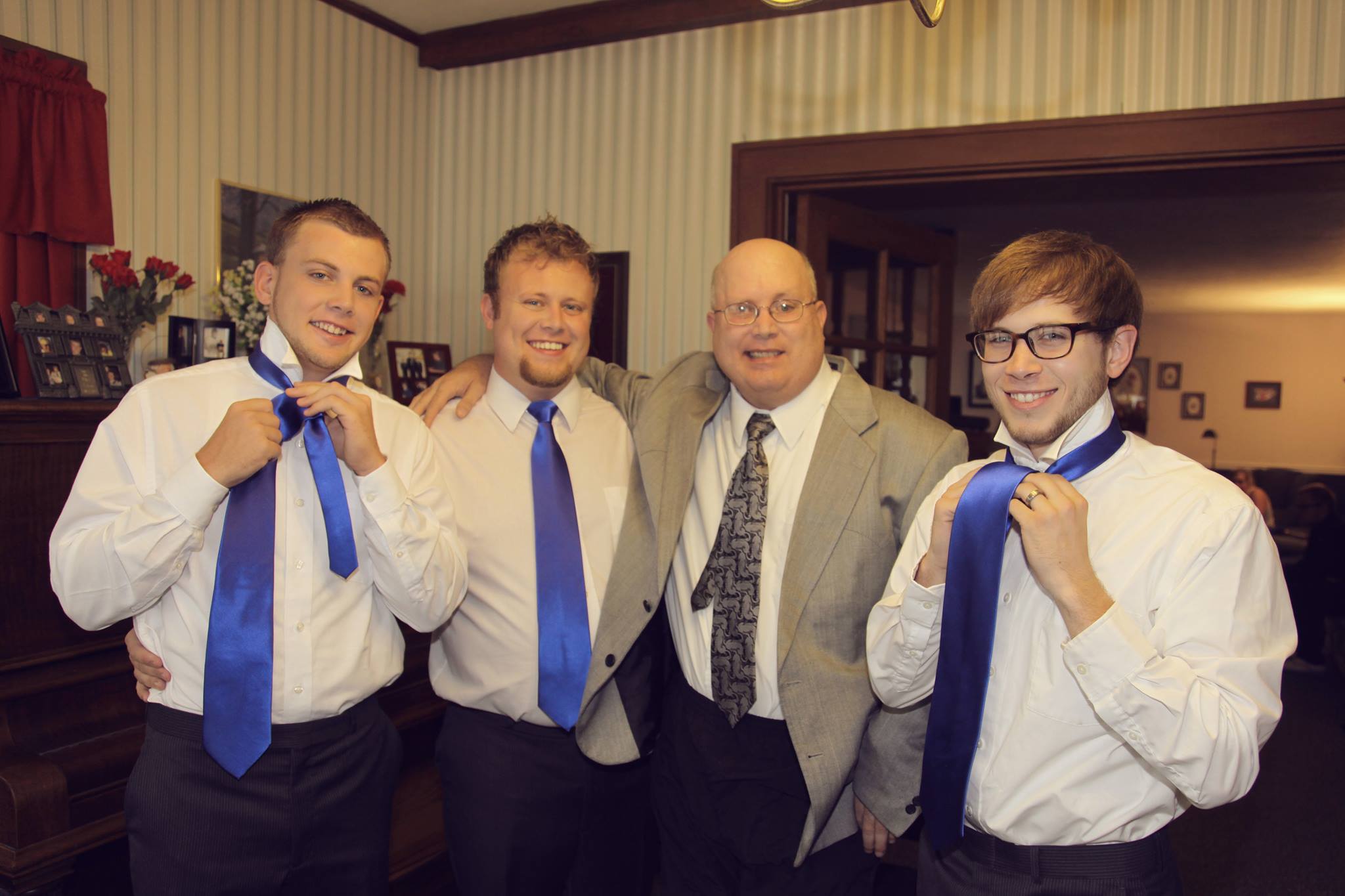 Andrew, Zach, Mike, and Caleb are all smiles before Caleb's wedding. 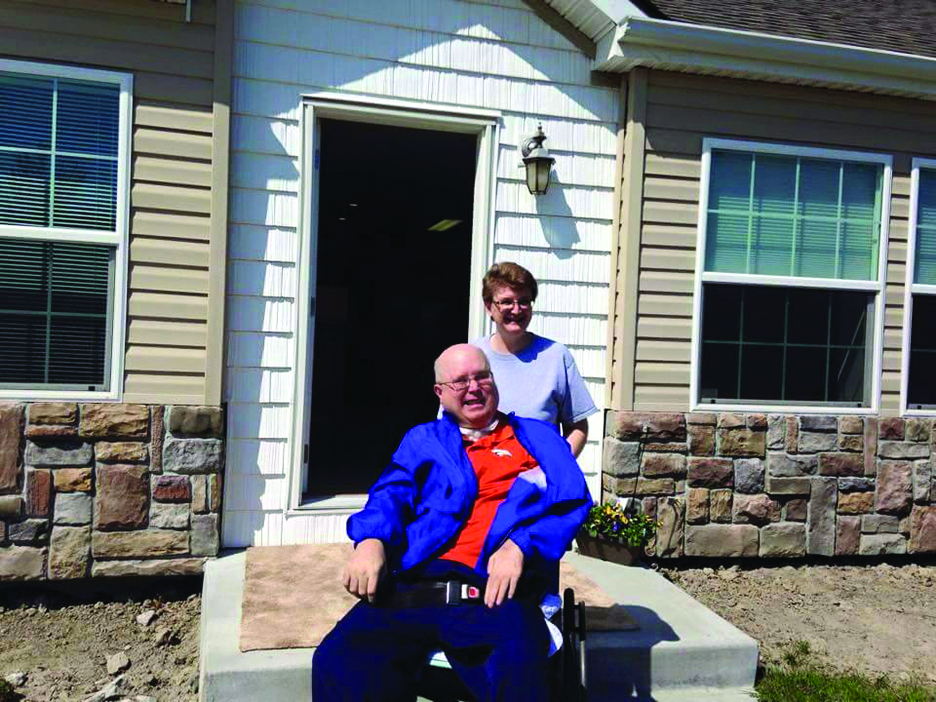 Janet & Mike in front of their home.